It's too late to bury the bowl 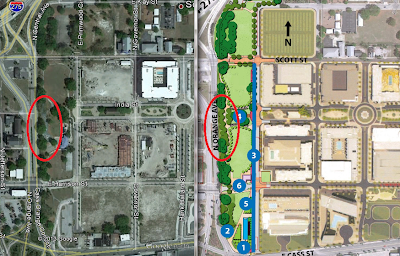 In St. Petersburg the battle over the Pier continues to boil, with the bumper stickers, yard signs and social media pages battling for the hearts and minds of the city and its politicians.  Over here, on the other side of the bay, its been years since we have seen any preservation fights as big or controversial as the Pier / Lens fight.  The fight to preserve the Tampa Gas Company tower in 1993 was one of Tampa's largest and bitterest preservation fights.  2006 was also a rather big year with citizens waging a similar battle to get the City Council to vote against demolition of the Maas Brothers building.  That same year marked start of a battle over a city park, more precisely a skate park.  Today the fight over the Perry Harvey, Sr. Park "skate park", more affectionately known as the Bro Bowl has been resurrected.

Plans to redevelop Perry Harvey Park, where the bowl resides, have set on the shelf for almost 6 years until the City finally received the funding last year to go ahead with the redevelopment.  Back in 2005 / 2006 when the redevelopment of the former Central Park Village and the adjacent Perry Harvey Park first started taking shape, there were no plans for the skate bowl or a skate park.  Local skateboarders came out to park planning meetings in droves hoping to save the Bro Bowl and eventually winning a bigger and more modern park at the far Northern corner of the park, out of sight.  Tomorrow the Bro Bowl gets one last chance for life.  A group called the "Skateboarding Heritage Foundation", out of Delray Beach, FL, has put forth a request to get the Bro Bowl on the National Historic Register.  While not necessarily a saving grace, it is a necessary to step to achieving local landmark status which would preserve the bowl.

The Bro Bowl's only issue is age and desire.  Built in 1978, the bowl is only 34 years old (one year older than me).  It's 16 years shy of the National Historic Registers eligibility of 50 years old.  However, a structure can overcome this by conveying extraordinary historical significance. The bowl is one of the first original purpose built skate bowls in the country.  I posted a documentary that was made about the Bro Bowl a few years ago (http://tampaniatampa.blogspot.com/2011/11/bro-bowl-doc.html) it gives a pretty good overview of the history of the bowl.  While over a thousand people have signed the Skateboarding Heritage Foundation's petition on Change.org, https://www.change.org/organizations/skateboardingheritage.  Many others are happy to see the Bro Bowl die.  Rob Meronek of the Skatepark of Tampa posted this entry on the Skatepark's website today stating his desires, along with some pictures of the design of the new skatepark to built on the Northern end of the site: http://skateparkoftampa.com/spot/a.aspx?ID=1948.  I doubt members of the original park advisory are happy about this either.  The Pam Iorio appointed committee, which is made up of descendants and family members of the owners of businesses from the historic Central Avenue black business district, gave their opinion on the matter years ago.  I agree that this historic and tragically demolished district should get the full recognition it deserves.

However, I cannot see any reason for the City to completely erase the one bright spot out of the tragic urban renewal program of the 1960s.  If it was a choice between the Bro Bowl and the new skate park, then I could see a reason to let the Bro Bowl go.  But, looking at some of the few published plans for the park redevelopment online (see picture at top), it seems to me that once the bowl is demolished the area will just become a plot of grass and bushes.  I know I'm coming to the fight pretty late in the game here, call it me a Monday morning (or late night) quarterback if you will.  But what is the harm of keeping the bowl?  Are we destined to keep falling into the same preservation trap, allowing something to be destroyed only to have nothing of value put back in its place.  The sites of the Tampa Gas Company building and Maas Brothers sat vacant for years after demolition.  The Maas Brothers site eventually became a parking lot. It would seem like a slap in the face for the city to demolish the Bro Bowl, claiming it as an eyesore that doesn't fit the historic context of the redeveloped park.  Only to have them sod over the site and erect a plaque.  Why waste more of our money?  Let the Bro Bowl stay.