It appears that the Old Union Depot Hotel Building (aka Punisher House) was yet another victim of owner neglect and the economy, or owner neglect due to the economy, a Tampa Tribune post indicates.  The article notes that "The hotel's owners, Tampa Union Station LLC, had amassed about $362,000 in code enforcement fines, levied since 2009, at $1,000 a day."  And a recent aerial survey by the city showed that a major roof collapse had taken place.  And as we have seen too often here in Tampa (see Gary School) this eventually leads to total collapse.  After plans for a large condominium project failed to materialize during the downfall the property fell into foreclosure.  So with the consent of the current owners, the city came in on Sunday, May 23rd and demolished the building.  The city will put a lien on the property for $17,000 in demolition costs.

The city has recently set up new incentives to help owners make necessary repairs on historic buildings, in the wake of the Gary School tragedy.  The property that officials and the public are watching most closely is the Kress building on Franklin Street in Downtown Tampa, it is already showing signs of roof stress. But will this mean anything in today's economic climate where many properties sit in foreclosure?
Posted by Tampania at 8:53 PM No comments: Links to this post

Demolition and destruction!  Unfortunately this old building has gone with not a bang, but a whisper.  In fact, it seems that this demolition was barely audible, almost magical.  Well it seems that within the past week or so the Old Union Depot Hotel, at 858 Zack Street, met the wrecking ball. Wikipedia alredy lists the day of death as May 23rd.  This flatiron style, 2 story building was a unique fixture in Tampa.  Built in 1912 to service the recently built Tampa Union Station, it would have been one of the first buidings to greet passengers as they stepped out of the Station doors.  The building had six-sides and almost took on a flatiron style when viewed from the Nebraska.  The building was added to the National Register of Historic Places in 2000.  Of course the building is probably best known for it's role in the Punisher, as the apartment of the lead character and his band of misfit friends.  The lot was to be part of a planned office development dubbed "Union Station" however it is unclear whether the development is still going forward as planned.  The lot is already cleared, leveled and the 717 Parking signs are already up!  Punisher House 0, Tampa Parking 1! Posted by Tampania at 1:31 AM No comments: Links to this post

For over the last 100 years there was always a jail on, well not necessarily Morgan, but Jefferson street near the historic Oaklawn Cemetery. In preparation and with the hope that high speed rail would come to Tampa, demolition of the Morgan Street jail started in August of 2009.  This site will soon be the home of Tampa's future High Speed Rail station.  Constructed in 1964, the building was  functional, never anything special.  By the 90s overcrowding was a common problem, and the Orient and Falkenburg jails were used instead. 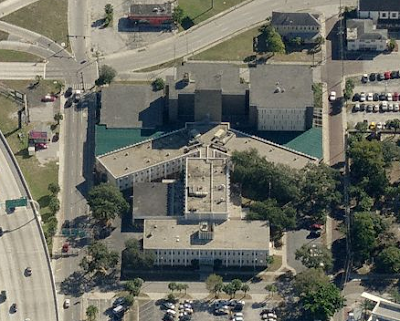 However, the 1925 structure it replaced was something.