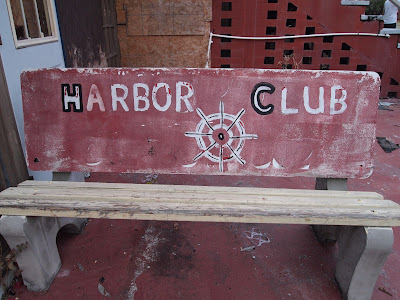 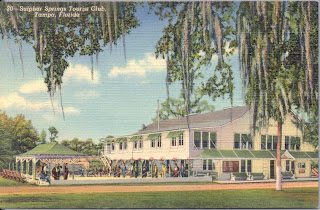 I don't know how I missed posting about this one!  I became obsessed with the run down Harbor Club building at the corner of Nebraska Avenue and the Hillsborough River about a year ago when a friend and I went exploring around the place.  I knew it was an old building.  I knew it had been a restaurant at one point.  And I also had some friends that said their bands had played there or that they had seen bands play there in the late 90s. While the building is in pretty poor shape, one thing really stood out to me... THERE ARE SHUFFLEBOARD COURTS HERE! 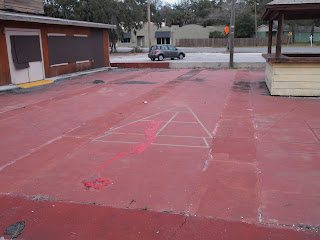 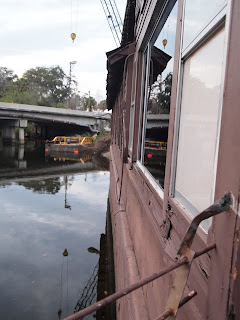 The pink streets of West Shore, or is it Westshore?


As I mentioned in my previous post I recently bought a house, it is in Northeast Seminole Heights.  Around the same time my work also moved its headquarters from West Tampa to the Westshore area at the end of Cypress Street.  So my world and my commute have changed pretty drastically, considering that I had lived in Hyde Park and had an easy 2 mile commute to West Tampa for the past 5 years.  I never really spent much time in Westshore or Seminole Heights before this so even though I thought I knew the city pretty well, I'm still finding new and interesting things to investigate.

The first that comes to mind, is the proper spelling of the neighborhood really "Westshore"? even though the street that it is named after is really spelled as two seperate words "West Shore"?  Even Google Maps spells it as one word!  Could this be as contentious as the whole La Setima / La Septima Seventh Avenue debate?


The second thing I hope to look into is the possibility of the existence of pink streets in the Westshore area.  While driving through the neighborhood along North A and North B just East of the mall I noticed that many of the curbs and the shoulder of many of the roads and even some of the sidewalks were a faded pink color.  The street was probably originally concrete or slab formed.  The streets of the are have since been repaved with asphalt, but only about a foot to the curb.  The pink curbs and sidewalks are spotty, the area photographed above is probably one of the longer stretches, most areas are patched with regular colored concrete curbs.  I immediately thought of the pink streets of St. Petersburg's Pinellas Point neigborhood (shown below).

Originally platted as Hanan Park, the area around Trask and North A and North B streets was developed during the boom of the early 1920s, although the area has changed drastically since then some of the original houses and buildings from the 20s are still standing.  Were pink streets a thing back then or was this just a local phenomenon?

In the near future I intend to highlight a few Seminole Height area features that have caught my eye.