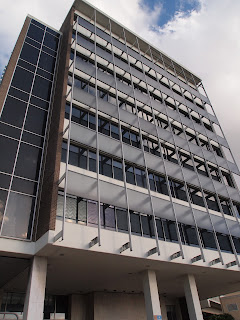 News came this week that the Mercantile Bank building in Tampa will be refurbished as an Aloft hotel.  The building at 100 West Kennedy has been abandoned since 2007, when it was slated for demolition to make way for an ambitious 50 story slender condo building.  The 9 story structure is a great example of international style modernism in Tampa.  The building is all right angles, when viewed from the East or West it almost looks like a rectangular building that swallowed a small square building.   The East and West facing sides of the building are made mostly of glass, with a metal and translucent panel sun screen.  Although, concrete still dominates the structure.  Brick vaneer covers the North and South facades of the building.

The renderings of the hotel after renovation show very little change to the physical appearance.  The articles and news pieces of seen speak more to major renovations happening inside, as I'm sure it will take alot of change to turn this 1960s office building into a hotel.  It looks like the sun screens will be altered into a more playful mass of vertical rectangles and an addition will be added to the roof.  A modern portico will be added to the front and a pool will be added tot he back terrace.

Later I will be looking at how this building was part of Tampa's mid-century modern riverfront.
Posted by Tampania at 11:47 PM 2 comments: Links to this post