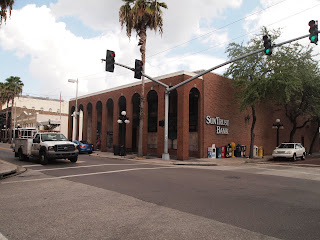 Ybor City looks like a town stuck in time, however it is a constantly changing place.  Buildings come down and another goes up, businesses move out and another comes in to take its place.  Various civic leaders and the city government have made sure that the look and feel of the historic district remains true to its roots.  Ybor City was placed on the National Register of Historic Places in 1974, The Ybor City National Historic District was created in 1989 and the Barrio Latina Commission started in 1959. Some say that the design review process for the area is too strict, stifling growth in an are that is just now starting to emerge from the damage wrought by urban renewal and the building of the interstate

I recently stumbled upon a picture of the bank at 1701 E. 7th Avenue, currently a SunTrust branch it was built as the Broadway National Bank (7th is also known as Broadway) opening in 1955.  The design of the building has always stuck out to me as a rather odd solution for building a modern structure in a historic area.   However, I would have never guessed that this building was as old as it was and originally such a shining example of Mid-Century modern urban infill.  Although just a big block it retains qualities of modern architecture prevalent in bank building during the time.  Pinkish marble adorns the front facade, brick surrounds the side and back windowless walls, and a linear line of windows punctuates the front.

The demolition of the Pruitt-Igoe high rise housing development in St. Louis in 1972 is considered to be the death of modern architecture.  However, it appears that modern design was unwelcome in Ybor City even before this event.  This building was targeted in the late 60s as part of the Ybor City Urban renewal project dubbed "R-13".  A 1967 article states that the building would receive a "Mediterranean" style facade.  However the building was given a rather odd arcaded brick facade the overhang was shortened and ornamental ironwork was added.  It seems to be a rather economical solution.  This building is not listed as a contributing structure to the Ybor City National Historic District. 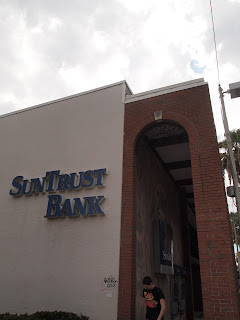 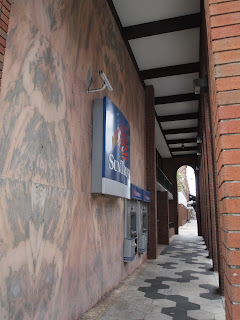 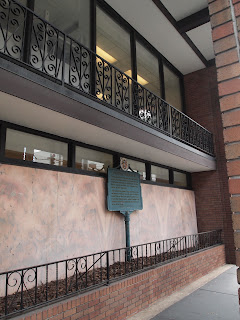 The only building I have seen in the area with a "similar" treatment is located at 1725 E. 8th.  Currently used as office space, the little one-story block building received wood shutters, a fake tile barrel overhang and ornate ironwork railings and columns.  However this building was built in 1961 after the inception of the Barrio Latina, perhaps this is one of the first examples of their hand in the design review process for the district?

Read more »
Posted by Tampania at 1:01 PM No comments: Links to this post