I had always been intrigued by the Erwin Technical School building on Hillsborough Avenue and 22nd street.  I always wondered why someone would build it as a school.  Well, it wasn't built as a school, it was originally built in 1959 as a Sears department store.  During the 50s Sears was looking to grow with modern America.  Americans loved their cars and didn't want the hassle of driving all the way to their downtown and fighting for a parking space to get Juniors new pants for the school.  Thus, the big department stores decided to push out into the wilderness of the suburbs where they could build on large lots to accomodate lots of parking.  Sears realized that Florida was a growing region and decided it would build a lot of new suburban style stores in the area to.  I've counted at least 10 built in Florida between 1950 and 1960.  Sears also knew that the styling of the stores had to be modern and reflect the new architectural style of the region. So Sears hired the law firm of Weed, Russell and Johnson out of Miami.  Principal Robert Law Weed was well known for his Florida modern style, having designed the Florida Tropical showcase house at the 1933 Chicago "Century of Progress" World's Fair and collaborated on the design for the new University of Miami campus. Read more »
Posted by Tampania at 6:36 PM 4 comments: Links to this post 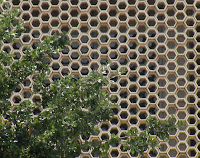 By the mid 1920s Mediterranean Revival and Craftsman were  the dominant building styles in Tampa.  Then the bust!  Building slowed all over Florida.  Just as this was happening new building styles were emerging, styles that embraced new building materials, lighter forms and new shapes.  Modernism was a style fashioned for  Florida, it is where styles like Miami Modern and the Sarasota School were championed.  But what and where is Tampa's Modern legacy?  We'll take a peek of what is left and what has disappeared in each corner of the city.  You may be surprised or you may, just like me, enjoy looking at these structures of concrete and glass and varying shapes.
Posted by Tampania at 2:16 PM No comments: Links to this post