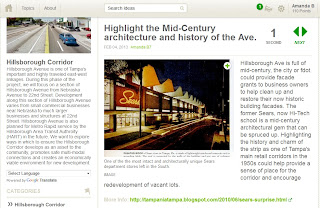 Over two years ago now (wow time flies!) I did a post on the old Sears department store building at Hillsborough and 22nd Street, now the home of Hi-Tech Erwin Technical School.  The Sears building is just one of many mid-century modern commercial / retail buildings along Hillsborough Avenue, which was becoming a major shopping and commercial corridor in the 1950s and 1960s.  My idea is that these gems should be revitalized and highlighted to help promote a cleanup and redevelopment of the corridor.   The North Biscayne Boulevard in Miami looked similar to Hillsborough Avenue, full of run down mid-century travel motels and shopping strips.  But at the beginning of the century, local historians and citizens began to push for a revitilization of the blighted area, and the Biscayne Boulevard Historic District was born.  Many of the seedy rundown motor lodges were bought and refurbished to highlight their mid-century style, becoming boutique hotels.  And many of the run down and vacant strip centers now host new tenants, many catering to the history of the area.  I'm not saying Hillsborough Avenue should follow the same model, but I think Tampa can take a few pointers from the Biscayne Boulevard revival to help reshape the Hillsborough, Nebraska and Florida corridors.

Please visit my Hillsborough Avenue idea page and second the idea if you like it.  Or you can create an account for the InVision ideas site and post your own suggestions.  If you don't speak up, your ideas will never be heard.
Posted by Tampania at 9:53 PM